It’s that simple. Take another look at my title for this blog entry. Especially the last part.

Why hire a professional photographer versus the soccer-mom-with-a-good-camera?  Here are 10 reasons why:

I’m happy to announce the photographs I captured on assignment last summer are now installed as backlit wall display prints at the soon-to-be opening of the remodel of the Rubicon Cafeteria at Miami Valley Hospital in Dayton. I am very thankful for the business and opportunity. This project was a creative collaborative effort with Deck the Walls and App Architecture.

I am very grateful to once again have the opportunity to photograph home interior and exteriors for Dayton area custom home builder Dan De Vol. I’ve photographed a number of projects for Dan since he first became a client in 2006. His custom remodel and home constructions are a pleasure to photograph.

I’ve photographed a number of other homes for other builders and real estate agents, here in Ohio and in South Carolina. I can honestly say Dan’s work is the best I’ve seen and photographed, plus he’s a great person and friend.

The following images are from two remodel projects he completed recently located in Bellbrook, Ohio.

When I first started with HDR photography, back in 2007, using a tripod for the required multiple exposures was a must, particularly in the low-light settings that I prefer for the types of subjects that work best for this particular tool. I use two tripods, a Bogen and a Giottos, along with a Kirk BH-1 ball head and L-brackets. A cable release is required as well. Anything to keep hands away from the camera during exposure while providing a stable and secure platform.

But what about those situations and settings when carrying and setting-up a tripod is not practical and/or appropriate while at the same time coming across a subject that is tailored-made for HDR (High Dynamic Range) ? Just yesterday I was touring the streets of Savannah with my daughter Emma, capturing scenes of beautiful southern-style architecture, hidden courtyards and fine details that make this picturesque city a favorite for street photography. Keep in mind that Savannah in mid-July can be like working in a sauna with heat and humidity rolling off the pavement and cobblestones. Just carrying a pro-grade DSLR and a few lenses – which I do using a Lowepro fastback 250 – can be cumbersome enough. Add the bulk and weight of a full-length tripod and ball head and getting around the city while navigating through gaggles of tourists can be a daunting and hot task. But there was so much that caught my eye. I knew to fully capture detail from darkest shadow to brightest highlight I would need to shoot multiple exposures of the same scene for merging and use of tonal adjustments for optimal results in my digital workflow.

Enter the compromise. With the auto bracketing feature of  the Canon 1D Mark III I can usually capture my three exposures needed for most HDR (actually I prefer five to six for interiors) while going “handheld” and still retain sharpness. The key is the burst rate on the 1D Mark III – the fastest available on a DSLR at 10 frames per second. I boost the ISO up to the 1600 mark and sacrifice some sharpness by using a wider aperture (4.0 or 5.6), but the auto bracketing and the high speed drive fire-off the three exposures with ease and without any noticeable shake from the camera being handheld. Granted it’s not the ideal way to capture multiple exposures for HDR work but it works in a pinch. Where this technique is very helpful is when shooting outdoor portraits that have that little bit of something extra in the foreground and background. Another important tip is to always shoot in aperture priority mode and bracket with differing shutter speeds. As soon as the aperture is changed from exposure to exposure the photographer alters the depth of field between shots and that’s not going to match to well when merging the files.

Below is one of the results I obtained after merging three, handheld  exposures using the Canon 1D Mark III and a Canon 17-35mm f2.8 lens. The subject is the interior of the St. John the Baptist Cathedral in Savannah. Setting-up a tripod in such a location is  . . . well . . . for lack of a better term, “not cool.” Besides my daughter Emma had her hands just holding onto the Canon 1D while I changed lenses. Fumbling with anything more would have been too much, taking away from the ability to move fast and easy and just having fun. 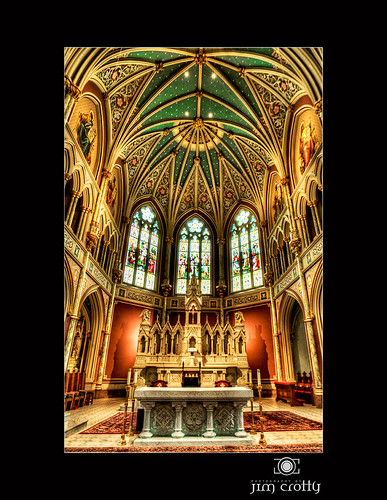 One of the advantages of working with a foundation in fine art nature photography, and subsequently transitioning into architectural and interior imaging services, is the ability to pick-up on the small details of a location, whether it be a home or bed and breakfast inn. Also, awareness of the subtle effects of natural light upon those details. Together the “feel,” or spirit, of the place shines through in each photograph.

Below is a quick snapshot of the cover and interior spread of the most recent issue of Housetrends Magazine. This is from a home and garden that I had the pleasure of photographing for Housetrends, located in New Carlisle, Ohio.

And here are some of my favorite images from an assignment shoot I did this past February, for The Inn and Spa at Cedar Falls in Hocking Hills, Ohio: